So, it finally happened. After talking & dreaming about it for 10+ years finally made the Haines, Alaska adventure a reality.

Adventure nearly came to a disastrous failure given the proximity of the necessary flight paths to get there. Started with early morning flight to Portland, OR at 6:10 am, then hung around all morning waiting for 1:30 pm flight to Seattle. To my surprise there were at least 5 other flights leaving much earlier while I "sat around". Originally was on an earlier flight, but 3 weeks before they re-booked me to the 1:30 pm flight?

In any case continued to walk circles (I really hate sitting) throughout the terminal then noticed my flight was going to be delayed in a major way! Uh-oh, this means would very likely miss my connecting flight from Seattle to Juneau!

Began working with the Alaska Airlines agents, they decided best bet would be to re-book me on Delta flight that was leaving in like 20 minutes...so very quickly hobbled (calf still gimpy) a good 15 minutes away; and waited in line. Then I recalled...oh shit, my checked bag has everything in it (coat, photo gear, etc.) so...

I hobbled 13 minutes back to Alaska Airlines and inquired about my checked bag...it had not been pulled and transferred to Delta. The Agents started working the phones feverishly. They wanted to put me on a later flight that went from Seattle to "Anchorage" and then to Juneau arriving around 12:30 am. Major concerns about arriving without my checked bag continued...especially since my schedule had me leaving Juneau on the Ferry towards Haines at 7 am.

As I was watching the Alaska Airlines Agent on the phone, she suddenly threw her fist in the air and exclaimed YES!

She made her way over to me and said "I convinced them to hold the plane for you in Seattle", then gave me a big hug! She must've sensed despair in my eyes as we discussed different options.

Finally, the plane arrived in Portland LATE. It was a short flight from Portland to Oregon, but my nerves were on high alert. The Seattle to Juneau plane was scheduled to LEAVE Seattle at 3:25 pm. We finally landed in Seattle at 3:23 pm. And of course, it simply takes FOREVER to exit a plane once it lands!

Finally busted through and exited the terminal from our plane; and yes, I was probably the fastest hobbler through the airport anyone has every witnessed! Found my gate, they said "Well, Hello Mr. Dougherty! We've been waiting for you..." and smiled.

Big smile on my face, didn't care one bit that I was THAT GUY; the LAST person boarding the plane.

Two quick stops in Ketchikan & Sitka for exiting and boarding. The runways were just INSANE, at one point I really thought we were landing on the water...they're so short and on small strips of islands.

Finally landed in Juneau, admittedly so I was VERY nervous whether or not my bag made the flight. Pacing around by the baggage carousel, watching bags come through o n e by o n e. Seriously, could it be that my quick hobbling skills to the departure gate was faster than the transfer of my bag?

Then finally...with only 2 bags circling the roundabout, a 3rd suddenly appeared...there it was a thing of beauty. My bag! Who woulda thunk one could smile so big at the appearance of a suitcase?

Big shout out and thanks to Alaska Airlines Agent, Anu Hakohen in Portland Oregon, for her ability to work it. :) 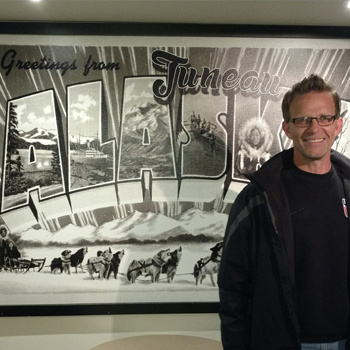