What initially drove me to research, explore and learn more about #Haines #Alaska was an article about an Eagle congregation that took place every year late November in Haines. That and well the picturesque Fort Seward surrounded by Chilkat Mountain Range. An estimated 2,500 - 3,500 Eagles congregate between mile 18 & 21 off Haines Hwy. This stretch of the Chilkat River doesn't freeze due to unique minerals in the rocks, so Eagles take advantage of this "feast" as winter approaches.

As we left Kroschel yesterday, Steve said..."you know it's going to snow tonight, I can feel it in the air". Low & behold, we were blessed with 2-3 inches of snow overnight. An incredible white blanket of snow for the Eagle photography adventure! Yep, Alaska is not disappointing whatsoever! 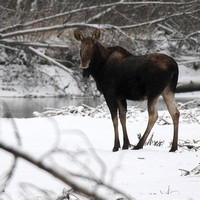 Heading up Haines Hwy, around mile 13 we crossed over a river; and I noticed a large brown object out of the corner of my eye. As I quickly glanced over it was a Moose simply hanging out by the river. Tom, who was driving the car in front of me, also noticed. Quickly pulled off onto a dirt road, grabbed the camera and "hobble ran" back towards the bridge. Lucky for us, the Moose was still there. It started heading towards us, then turned and splashed its way across the river disappearing into the woods. WOW! That was awesome!

Crazy to think I actually made it here to the Alaska Chilkat Bald Eagle Preserve! Amazing sights all around with so many Eagles literally everywhere. As Tom says, you have to pick your poison & focus on it; there's so much action it's easy to miss a shot if you're focused on trying to catch everything going on. Absolutely insane! I often get very excited in Omaha when happen to see "an Eagle" at NP Dodge Park by Missouri River...now there are hundreds, if not thousands of Eagles within a 3 mile stretch! 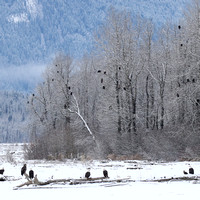 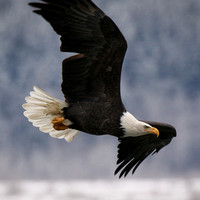 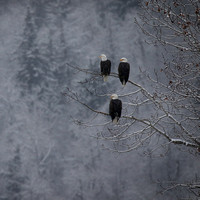 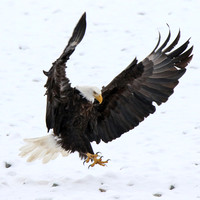 As your standing on the bank of the Chilkat River you can clearly see and hear the Salmon splashing around in the Chilkat River directly in front of you. The Salmon are insanely huge. In Nebraska I'm used to Eagles swooping down and grabbing fish, then heading off into a tree to feast. Here the Eagles simply feast right on the side of the river, they can pull the salmon ashore, but not so sure they could carry anywhere. Even with the Eagles front and center, I still think my favorite shots are soaring through the sky, especially with the huge mountain backdrops. Challenging to capture with the vast open background, but when you nail it; the shots are really stunning! 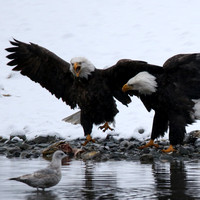 Many "battles" occur which is very interesting and fun to watch. It's almost as if there's a challenge of authority and power going on. There might be food laying untouched, but yet some Eagles are adamant at "intruding" on an an existing meal already being consumed. One day we were with the Eagles, and there was a large fresh bear carcass in the river. Talking with some locals apparently word was a Canadian tourist had shot the bear that morning and tossed the carcass in the river. Bear hunting season is open until December. Well, the Eagles had a feast; guess they enjoyed a different taste for a change?

As you can probably guess, of all the photos taken on the Haines Adventure, over half were with "the Eagles".  Just an amazing animal, could watch them for hours not even realizing how much time has passed... Given the quiet peacefulness of the area all you really hear is the river flowing, along with an Eagle "call out" here and there! (Watch & Listen to video I shot above) 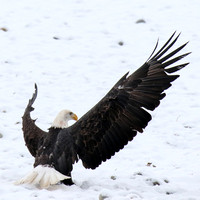 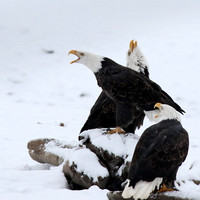 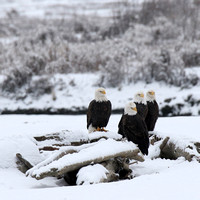 After a cloudy few days the bright sun reared it's ugly head the 2nd day in the preserve. This presents less than perfect lighting conditions as the day progresses. Given the bad lighting, Tom and I ventured further north on Haines Hwy looking for Trumpeter Swans that Tom knows frequent the area. Unfortunately, the locations were all frozen and no signs of swans. Simply gorgeous sights though just shy of the Canadian Border!

When traveling to Haines, there are 3 options...

Well, only 1 or 2 are valid in my situation. Occasionally, Alaska Seaplanes cancels flights due to weather conditions, so you need to use the Ferry as a backup plan. Unfortunately, I had caught wind "my backup" Ferry was being cancelled due to high winds causing unsafe conditions in the Lynn Canal. So, if my planned flight was cancelled there wouldn't be any transportation options to return to Juneau for my Alaska Airlines flight home. As much as I'd like think this would be good, I'd miss my DCrew (Dougherty Crew) back home! So I moved up my "Seaplane" flight back to Juneau up a day...so this would be my last night in Haines.

In any case, while the bright sunny clear skies "corrupt" the Eagles photography, on the positive side, a clear sky is necessary to dramatically increase your chances to possibly see The Northern Lights at night. Of course, I'm always hungry for more and more while in Alaska as it just doesn't stop with adventure, and things to explore!