As we ventured out of the Alaska Marine Ferry Port, it wasn't but about 4ish miles before the picturesque Fort Seward revealed itself from Lutak Road. I'd seen this sight before by way of "walking around" via Google Maps; but in person was a sight to behold and simply surreal. Yeah, pretty sure I could live here...

We made our way through the outskirts of Haines to the intersection of Lutak Rd. & Haines Hwy. It was here where we hung a left to head up north on the infamous Haines Hwy! This insanely beautiful drive provided a glimpse of "The Valley Of The Eagles" and extraordinary views I later learned were referred to as the Cathedral Peaks. It also provided some educational background from Tom on the original Klehini River Bridge. Originally built by John Schnabel, who's grandson Parker Schnabel, is in the TV show Gold Rush...which as you'd expect, wasn't necessarily all that the cameras made out to be...

After mesmerizing at "Haines" via Haines Hwy the entire way, we finally arrived at the Kroschel Wildlife Sanctuary.

JUST AMAZING! The animals who live within have had their lives saved and have a good life. The caring owners, Steve, Mario & Rocky have a special relationship with all their animals. It was so incredibly amazing watching Steve speak to all the animals in different "languages". Unlike anything I've ever witnessed in my entire life. 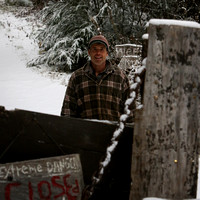 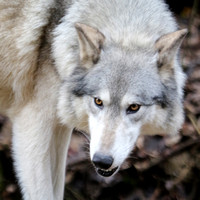 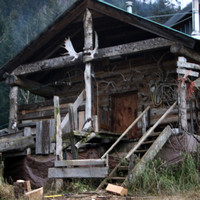 I must admit, I was slightly "nervous" given our proximity to the animals, but Steve let us know when to back off or not get too close. Our first visit was to Isis (note: named before "ISIS") the Wolf, I know wolves are larger but until seeing Isis close up didn't really comprehend. While being very playful, she wasn't in a howling mood; well until later when we were in another location! I'm not sure I could actually name a favorite animal we had the pleasure of experiencing; they all were so unique while yet so naturally wild and at home.

Of all I'd probably say Kitty the Grizzly Bear probably intimidated me the most simply due to her size and power. As I recollect the scene now, all I can really do or say is shake my head and say JUST WOW!! 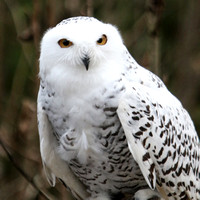 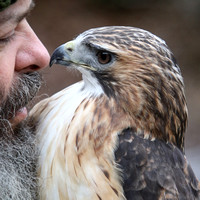 Whisper, a snowy owl, was a sight to withhold! Just so striking and beautiful; brilliant bright bright white! She was very particular about not getting close and quickly let you know. Really enjoyed how Lennox the Lynx strutted around showing the prowess, keen awareness and natural preying instincts. Mario and Thumper, a red-tailed Hawk, were a dynamic duo whom you could tell had forged a special relationship.

I actually fed Karen the Moose a carrot twice! Once while planting a kiss on her nose, and a 2nd time when she took a carrot bit by bit from my mouth! Later that afternoon, while in another location, she seemed to get a little antsy, so we left her be for the day...maybe she wanted another carrot? Just a crazy beautiful animal whose size is incomprehensible until you see in person. 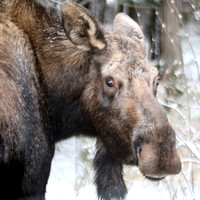 To close out the adventure we were treated with an introduction to Banff, a Wolverine who can be very temperamental! I was somewhat nervously miffed as to whether or not an attack was happening...or Steve and Banff were simply playing! Steve said, well it depends because he can get rough especially when the temperament changes drastically and suddenly. 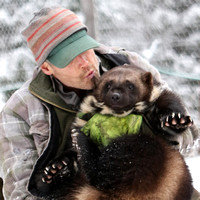 I really, really, really loved the atmosphere of Kroshel, a natural living for all residents. Simplicity & Beautiful all in the same sense, nestled away in the quiet serene wilderness off Haines Hwy. I've always been in big believer in natural beauty and my visit to Kroschel only strengthened it.

All in all had the pleasure of meeting: Karen the Moose, Kitty the Grizzly, Lennox the Lynx, Philippe a Silver Fox, Wendall an Ermine, Thumper the Hawk, Whisper a Snowy Owl, and Bannf the Wolverine!

Day 2, "Part 2"...starting to garner that feeling that Alaska never disappoints? Day 3 will bring a visit to the Alaska Chilkat Bald Eagle Preserve!

Carl J Samuelson(non-registered)
I am LOVING the recap, and, of course, the photos; great stuff, G!
Connie Fuhrman(non-registered)
Love the picture special the moose giving you a kiss! I will have to read and look a number of times to actually see it all! Great job Gary!
No comments posted.
Loading...
Dordio Photo
Powered by ZENFOLIO User Agreement
Cancel
Continue